The project “Is everybody in? The ceremony is about to begin” sides by Homi Bhabha when he writes that: “It is the “disorder” of our books that makes of us irredeemable ‘vernacular’ cosmopolitans committed to what Walter Benjamin describes as ‘the renewal of existence’. In subtle ways that disorder challenges the shelved order of the study…”.
It moves further to side with Fred Moten when he expands the ideas of study and collective authorship into another sense of practice – a form of coming together akin to jazz improvisation, ecstatic, precise, counter-intuitive that may or may not produce commodities (“eloquent vulgarities” he calls them): “One book I was reading compares the physicists working at German universities in the early Twenties to the jazzmen inside New York City clubs, how both of these collective groups created the century’s best. People forget Einstein’s practice was deeply creative, that often what he called thought-experiments occurred to him through daydreaming intuitive questions and reality-pictures, a kind of pre-numerical thought”.

The book will emerge ceremoniously between March 20 & May 20, 2021 and will take its cue from the fetish-notebooks of Walter Benjamin, William Burroughs, Michael Taussig, Mihalis Lekakis (in the ACG Art Collection), as well as from all kinds of other online and offline book-hybrids, new forms born within the Covid19-quarantine days.
It will gather contributions by many confabulators, including ACG students.
It may (or may not) appear in print… 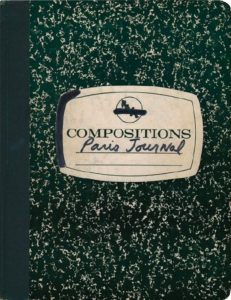 1. Jim Morrison kept notebooks during his time in Paris and prior to his death. They contained drawings, poems and thoughts . The green one titled “Paris Journal”, was part of the legendary 127 Fascination box, the archive of his manuscripts saved by his common-law wife, Pamela Courson and auctioned some years later. 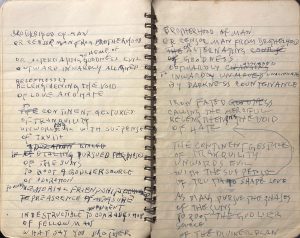 2. The notebooks of Mihalis Lekakis contain his handwritten poems and belong to the ACG Art Collection along with other personal letters and postcards exchanged between the artist and friends.